After a snap has been created and released to the Snap Store, its published revisions can be moved between channels from both the command line and from the Snap Store web UI.

Moving a snap between channels helps to manage a user’s expectations in any trade-off between stability in the stable channel, and cutting edge features in the edge channel (as an arbitrary example). But its also a useful technique for beta testing, or for when a snap needs to revert to a previous revision.

See Releasing your app for details on how to upload and publish a snap if you haven’t done so already.

The web UI’s release management functionality is equivalent to using snapcraft release on the command line, and both require that you first login to the store.

After logging in to the Snap Store and selecting a published snap, click the ‘Releases’ tab to access the release management functions. 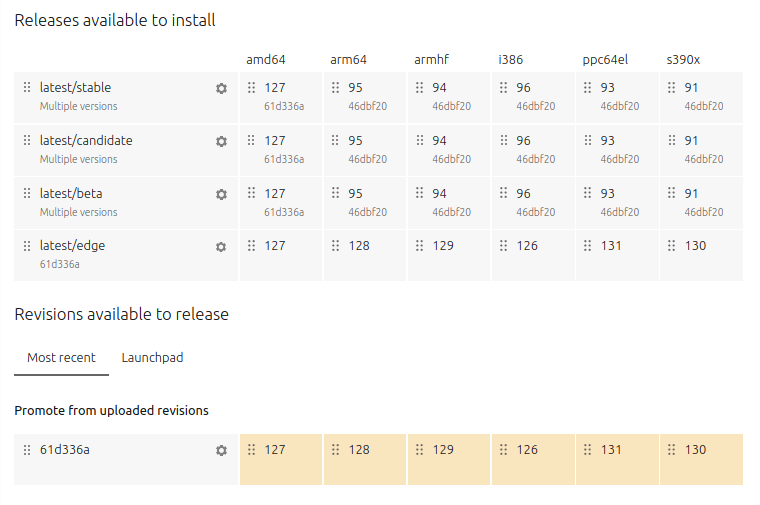 The Releases page lists which revisions of a published snap will be delivered to users tracking a specific channel.

On the command line, with a developer account already created, enter the following to login:

The command line equivalent to the web UI’s Releases page is the output from snapcraft status <snap-name>:

To move a snap between channels in the web UI, simply drag a revision from one channel to another, or use the cog drop-down menu on a revision and select a destination. 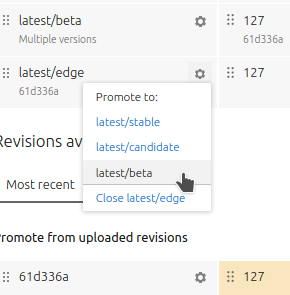 Click Save to make the requested change, or Revert to undo the proposed changes.

On the command line, the release command takes the snap name, the revision you wish to move and the destination channel (or channels) as its arguments:

You can also move earlier revisions back into a channel:

See Channels for more details on how channels, tracks and branches can be used, or Publish to a branch for details on how snap developers can use branches to publish temporary snap releases.

A snap’s distribution can be limited from the Snap Store web UI by two options listed on a snap’s Settings page:

The Distribution options set whether a snap can be installed in all territories (default), or whether its distribution is either

Activating either of the Selected territories fields will open a drop-down list of territories from which to choose from. More than one territory can be added.

Help improve this document in the forum.